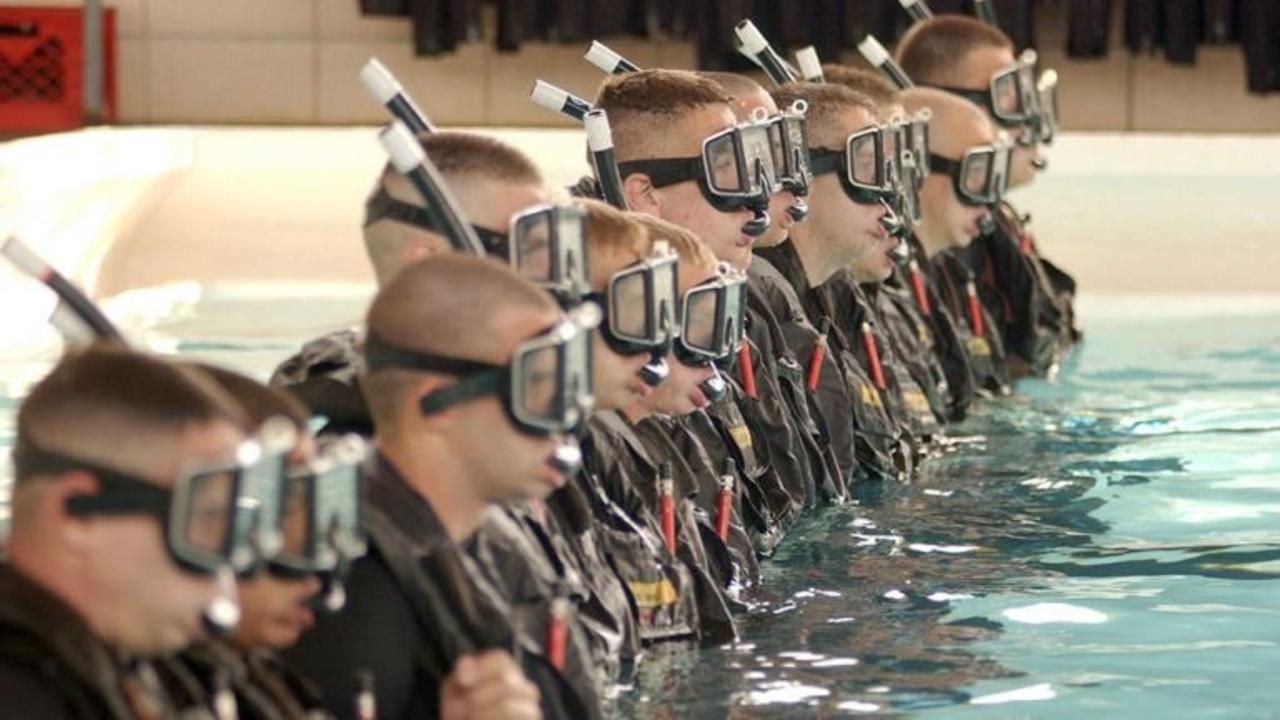 There’s a sink-or-swim mentality floating on athletes’ minds. There’s no question that, when competition time comes around, “Survival of the Fittest” accurately describes how athletes view the importance of the game and their involvement in it. Either they ‘get it’ or they don’t. Those who ‘swim’ come out proud, confident, and successful…

…but those who ‘sink’ suffer disappointment and embarrassment; if it’s really bad, they risk removal from the team. And, for the coach worried about the team's pool of talent, there’s rarely someone standing on the sidelines ready to replace the fallen soldier.

It only makes sense to give athletes the best training to optimize their potential and make it out of the game alive. And, if we want the best training method, we need to model it after the best-trained: the Navy SEALs.

No doubt SEALs understand the value of preparation. This elite taskforce undergoes some of the toughest military training in the world. When they use the term "sink or swim", they really, really mean it.

“SEAL” stands for Sea, Air, and Land. As the name suggests, they have to be prepared for absolutely anything. Their training—known as BUDS (Basic Underwater Demolition/Seal)—is a six-month physical and mental onslaught that includes jumping from aircraft, running in sand, sleep deprivation, and hours of treading strong currents. For that super-trained task force, playing with death is all in a day’s work. You might be asking what this has to do with sports. Well, a lot, actually.

"We will either find a way, or make one." - Hannibal, Roman commander

The SEALs’ recruiting process is notoriously stringent. They only take in the best of the best—the toughest, fittest, most intelligent candidates available—then train them to perform, execute, and make split-second critical decisions under pressure.

But recruiting the “best of the best” simply wasn’t cutting it. Despite finding elite candidates, 75% of recruits were failing in the first weeks of BUDS.

So the Navy began paying more attention to their process. They noticed candidates weren’t failing physically, they were failing mentally. Despite their highly educated, highly screened pool of recruits, many of them lacked the mental skills necessary to be successful in the program.

One BUDS component is underwater battle training. Donned in full scuba gear, cadets work on a combat-type activity underwater while instructors tamper with their hose, tank, and tear their mouthpiece away. The humanly natural response is to panic. The Fight-or-Flight response kicks in: cognitive function shuts down, respiratory and cardiovascular functions heighten, fine motor skills deteriorate, and primal instinct takes over. Cadets couldn’t think, couldn’t problem solve, and couldn’t rationalize.

In other words: they became ineffective in their task.

The truth is, the failing candidates weren’t weak, they were simply human. For instinct to take over is an entirely natural response. What cadets didn’t know was how to control their instinct.

The Navy soon realized recruits could learn to properly respond to valid threats through mental conditioning.  They were taught to relax, breathe, focus on the short-term goal, use positive self-talk, and visualize in order to deal with stress and find a solution to the immediate problem. In this way, panic was replaced with solid decision-making.

The SEALs mental training is based around the concept of neuroplasticity (i.e. brain flexibility), which is the brain’s ability to teach itself new ways of reacting to situations by forming new neural connections.

“The battle, sir, is not to the strong alone; it is to the vigilant, the active, the brave."-Patrick Henry, political leader in the American Revolution

The science behind mental conditioning.

For decades scientists believed the human brain was static; that, after a certain age, it lost the ability to grow and change.

We now know that the brain is highly adaptive. Not only can it compensate for physical changes, such as injury (like when smell or hearing is heightened when vision is lost), but it can also adjust responses to new situations or to changes in environment.

In laymen’s terms: with correct training, the brain can change and adapt itself to survive.

Unfortunately, brainpower is often taken for granted. People are more likely to believe changes they can see than those they can’t. When neurons fire faster in agility drills, we see the results. When physical skills improve and become more automatic due to neurological changes, we believe in it. But when it comes to purely mental skills, we don’t trust that the brain has the capacity for change and improvement.

Lucky for us, it does.

As the SEALs have shown, the brain can be taught to override primitive instincts previously thought to be hardwired. In fact, the SEALs’ mental training is so effective that it increased their pass rate by over one third.

Why mental conditioning matters to athletes.

Athletes may not be heading into war zones or jumping out of airplanes, but the brain doesn’t know the difference. Our Fight-or-Flight response hasn’t evolved to recognize real threats versus imagined threats, which is why our brains believe every competition is a potential life or death situation. It’s why SEALs cadets panic in an otherwise safe swimming pool with plenty of rescuers around. It’s not the absolute actual threat; it’s the PERCEPTION of a threat.

And, for most athletes, their sport is the most intense thing in their life. Most of them feel more acute pressure on the athletic field than they do in school or social situations. Unfortunately, many athletes don’t have the coping skills they need when things get difficult, which is why they might hesitate during competition and say they were “paralyzed by fear” or “caught like a deer in the headlights”.

Athletes who feel this way aren’t wrong. Like the SEALs cadets in the pool, they’re simply experiencing a normal, human response. Sports provide challenges that test mental skill and capacity and, much like SEALs instructors, athletic coaches work relentlessly to put their athletes in difficult situations in the hopes that they will grow and adapt.

What we can learn from SEALs is how to better facilitate brain growth and adaptation. Sure, we can throw young athletes in the deep end, let them panic, and hope they’ll eventually learn to ‘swim’. But why take that risk? It’s better to train athletes so they develop the mental skills required to react appropriately, stay afloat, and, eventually, thrive both on the playing field and off.

So, this year, as you decide on a physical training plan, think about one for the brain as well. You’ll be amazed at how many of your athletes are fully capable of not only surviving, but thriving, when given the proper mental tools.

If you enjoyed this article, subscribe to our newsletter to keep up to date on our latest news.